We have been talking about many different cultures and religions who use henna as part of a ceremony. Today we are highlighting the bridal ceremony specific to Sephardi and Mizrahi Jewish culture.

Sephardic Judaism originated in Spain and Portugal, however, after being expelled from their homes they immigrated to Amsterdam, North Africa, and the Middle East.

Mizrahim Judaism originated in the Middle East where the largest communities reside in Iraq, Iran, and Yemen. Most Mizrahi Jews now live in either Israel or the United States, but do carry strong ties to their home countries. 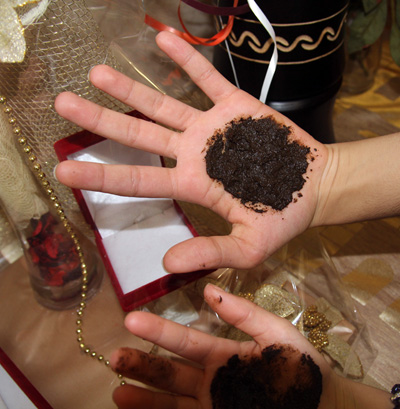 Similarly to the Islamic faith and Hinduism, a bridal ceremony is custom and includes henna. The rituals secure fertility, beauty, and ward off evil entities. The Jewish ceremony is either held in the bride’s home or the mikvah. The mikvah is a sacred bath house used to purify you for various reasons in the Jewish faith. The Hebrew word for henna is Hina and resembles the relationship made between god and the bride on the eve of her wedding. After the bride had made her agreement to fulfill the three commandments promised to God, a ceremony of henna paste begins. The ground henna leaves are soaked in water, turning them red. It is then cooked down to a paste and placed in a bowl. The mother of the bride lifts the bowl over the bride’s head and the women begin to chant and dance to the beat of drums. The bride then takes the bowl and raises it over her head, dances and then raises the bowl over the head of the woman she would like to bless. Each woman then takes turns raising the bowl over their heads as they all chant and dance into a state of ecstasy. After all the women have received their blessings, the matriarch of the group dips her fingers into the paste and paints two circles in the palms of the bride. In the center of the circles she will place a blue candy in order to ward off the evil eye. She then does the same for all the women in the room. The stain of the henna is meant as a reminder to the bride of the compact she made with God, and is shown as an approval to consummate the marriage. 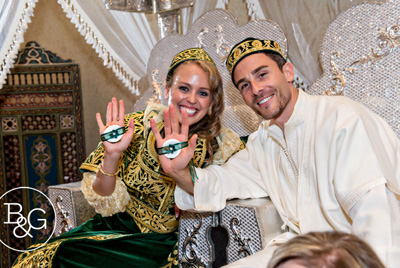 The women who also received this mark serve as a witness to this compact with God. The henna is used to symbolize what happens to the bride during the ceremony. When the henna is fresh, it is green, symbolizing the bride being “green”, pure and innocent. During the cooking process when the henna turns red, this signifies the bride coming to life. It also symbolizes the fertility of Mother Earth. The male’s role in fertility is also represented in the cooking process by the mother-in-law. She cooks the henna, which is strengthening the bride and groom’s fertility.

Henna also carries a magical property within the Jewish culture. It is said that demons wait to attack humans during times of transformation in their lives because that is when they are the most vulnerable and sensitive. The night before the wedding it is customary in both the bride and the groom’s homes to make small piles of henna in the corners of the room to protect them from demons who may try to mate with them in order to reproduce.